I have this thing about time.

When I warm my coffee in the microwave, I use one minute and two seconds.

Never, ever, do I set things for exactly on the hour or half hour.

Is that a quirk? I can’t explain it. But when I’ve tried to overcome it, I usually fail.

We all have quirks. I’m not talking about Monk-like OCD compulsions (I did love that show, however), but little idiosyncrasies that make us who we are.

Think about the character of Christopher Snow in Dean Koontz’ books Fear Nothing (1997) and Seize the Night (1998). Christopher has xeroderma pigmentosum, or XP, a rare genetic disorder that requires him to avoid ultraviolet light (daylight).

Not exactly a quirk, but throughout the novels Christopher’s condition creates, necessarily, interesting quirks that contribute to the books’ plots in ways that would make the books impossible without them. 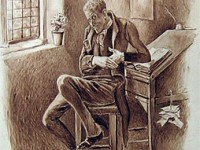 Another great example is the character of Uriah Heep in Charles Dickens’ David Copperfield. Heep was a greedy man whose quirk was rubbing his hands together as he spoke, as if gleefully anticipating how he was going to cheat someone. Or was he subconsciously wiping his hands of the dirty money he blackmails his boss for?

Up the tension or drama

In my current manuscript, one of the characters has a habit of clicking his ballpoint pen when he’s nervous. Okay, maybe not highly original or even all that unusual. But, in a key scene his quirk becomes a way to drive the scene and increase the pace to a frantic pitch.

Character quirks are another tool in your writer’s toolbox. Use them well and you can create a character, and a novel, for the ages. But beware of overindulging a quirk—too much and your character becomes a cartoon.

7 thoughts on “Got Quirks?”